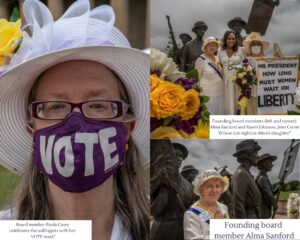 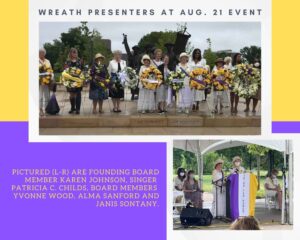 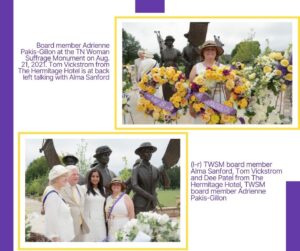 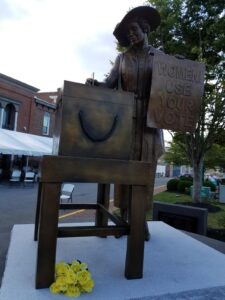 Tennessee’s newest suffrage statue unveiled in Clarksville on August 15. 2020. It’s called “Tennessee Triumph” and is located on the public square near City Hall.

Paula Casey and Bill Haltom were at The Hermitage Hotel with Joe Hanover’s bust and Bill’s new book, “Why Can’t Mother Vote?” on Thursday, Jan. 30, 2020. The bust will be featured on the upcoming Memphis Suffrage Monument “Equality Trailblazers” this Spring. 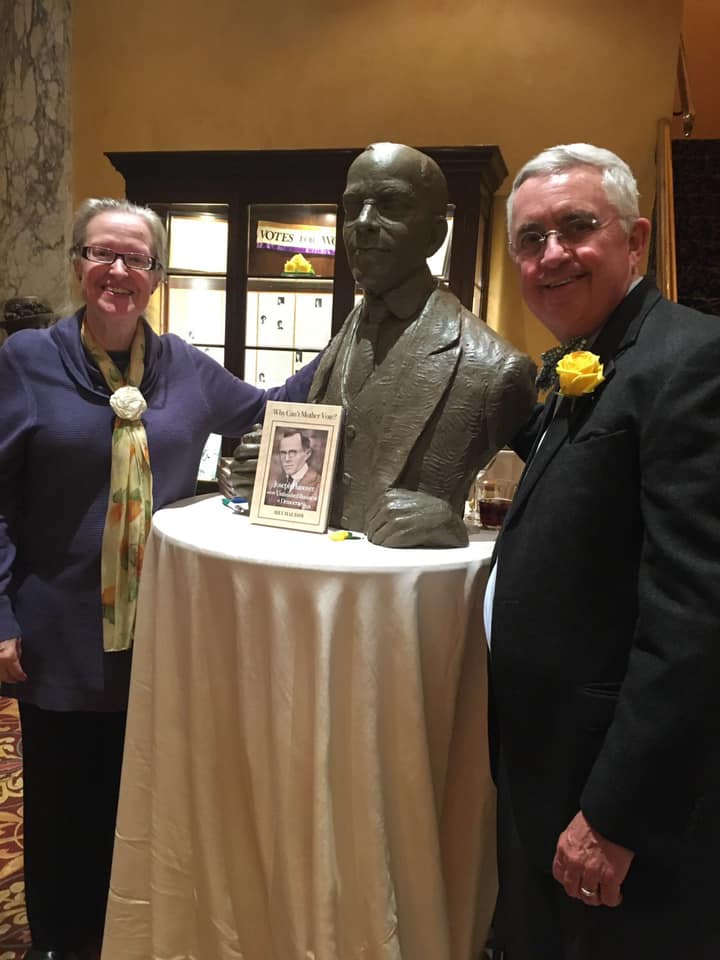 Thank you to everyone that could make it out to Bounty and Broad Tuesday night for the book release and signing of “Why Can’t Mother Vote?” written by author, speaker, and attorney Bill Haltom. Featured here with Bill Haltom is Paula Casey with the TN Woman Suffrage Heritage Trail and publisher Jacque Hillman.

Sue Shelton White committee members celebrated the 99th anniversary of Tennessee’s ratification of the 19th Amendment on Sunday, Aug. 18, 2019, at Jackson City Hall. Pictured are (l-r) Ginger Terry, Mayor Scott Conger, sculptor Wanda Stanfill, and Jacque Hillman, committee chair. The new granite marker has been placed in front of the statue with donor names and the wording of the 19th Amendment. 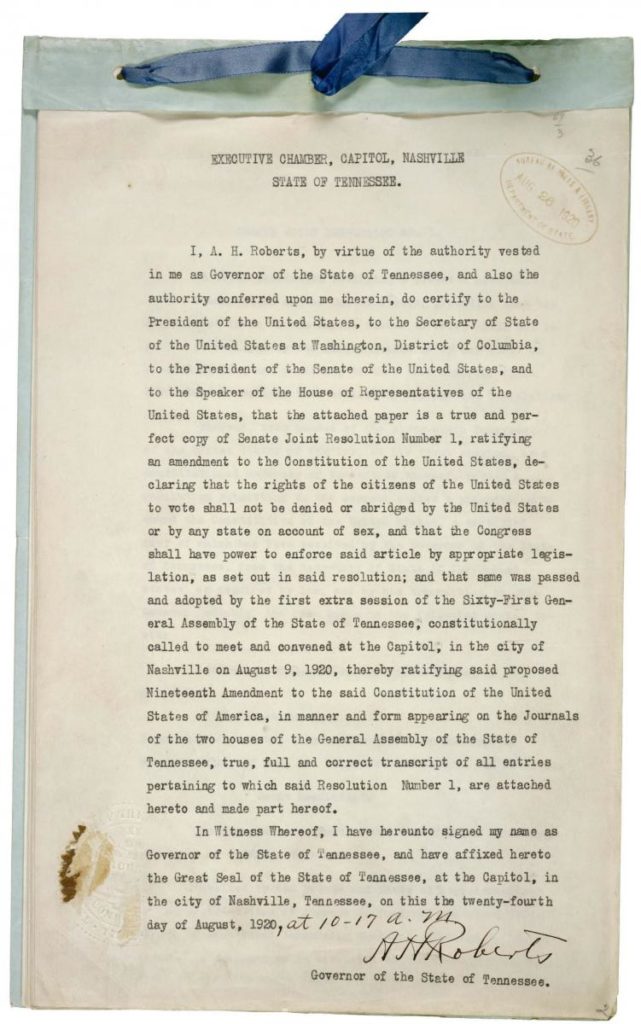 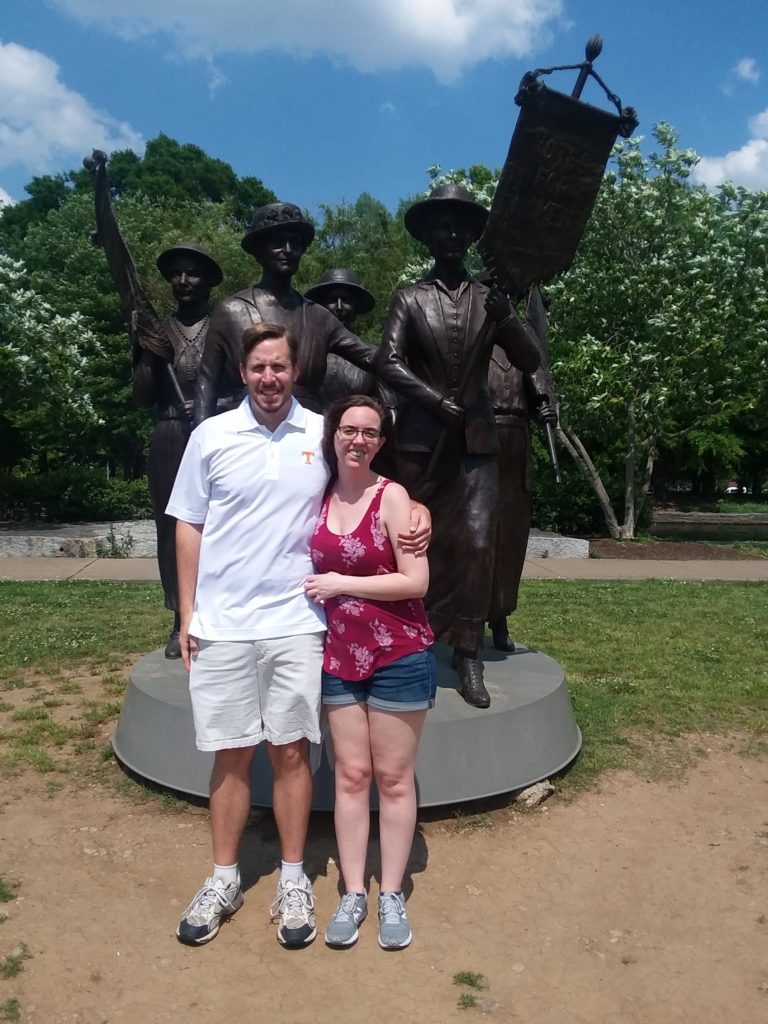 Tyler Boyd and Sarah Hurley visited the TN Woman Suffrage Monument in Centennial Park earlier this summer (2019). Tyler is the great-grand-nephew of Harry Burn, who was in the 1920 special session of the Tennessee legislature and cast the deciding vote for the 19th Amendment’s ratification. He has written a book about his great-grand-uncle that can be ordered by clicking on this link: https://www.arcadiapublishing.com/Products/9781467143189

Link: Tennessee women have voted with pride for 100 years 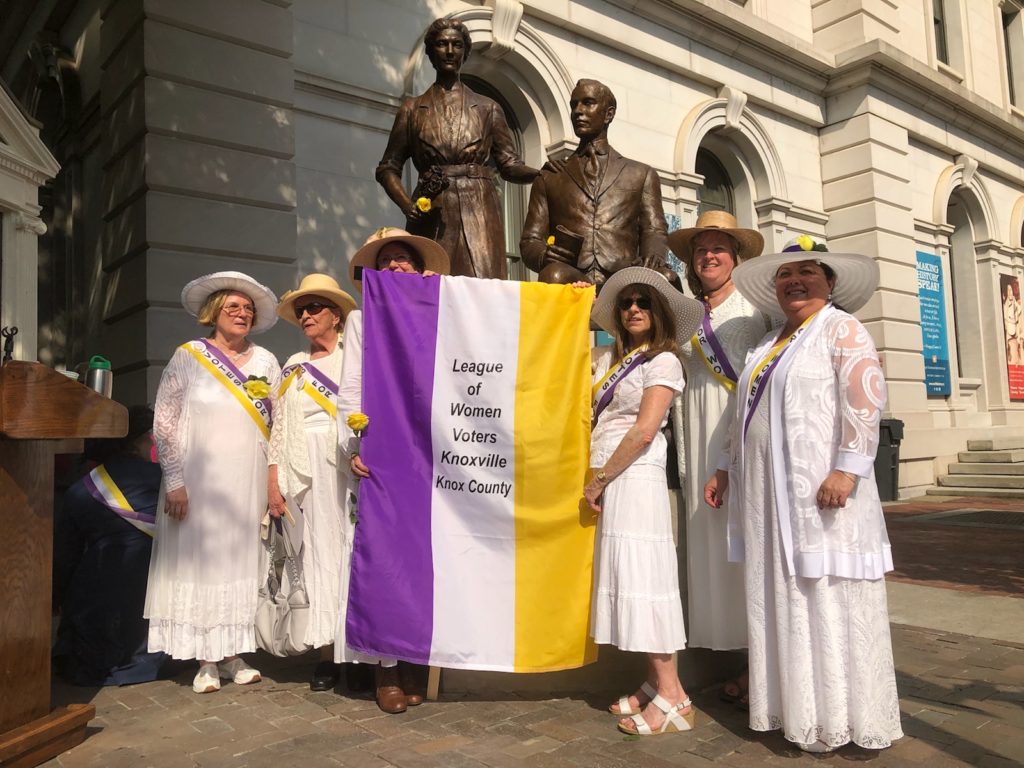 Twins Abbay and Phoebe Wallace, second graders at Campus School in Memphis, hold their poster and photograph of their great-great-great-grandmother, Memphis suffragist Mamie Duffy Willingham. This is what’s in Mrs. Willingham’s obituary:  “When Carrie Chapman Catt fired women with dreams of voting, Mrs.
Willingham was a member of the suffrage group here, and escorted by “stunning police officers”
—- led the group’s first parade down Main.” This was written on October 15, 1952. 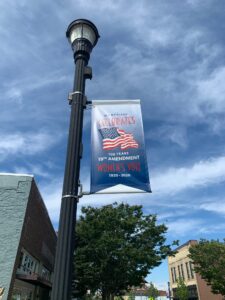 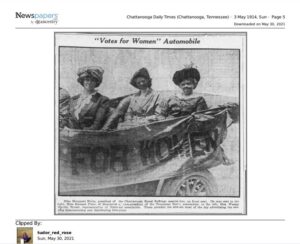 These 3 Tennessee Trailblazers are featured around the Tennessee Woman Suffrage Monument in Nashville’s Centennial Park.

The Clarksville-Montgomery County 2020 Vision Committee placed the first suffragist grave marker honoring Constance Rudolph Brown. The Yellow Rose Marker is placed flush with her gravestone in Sango Cemetery. She is the first local suffragist identified. In the Montgomery County courthouse, a picture of a few good men and a large number of women shows her in the front row holding a suffrage banner. During the votes for women campaign in 1917, Constance Rudolph was a rural school teacher and not yet married. Vicki O’Guin in Sango did the work in securing needed permission and Brenda Harper got the thumbs up from her niece, Rosemary Kalmar, to honor Ms. Brown.