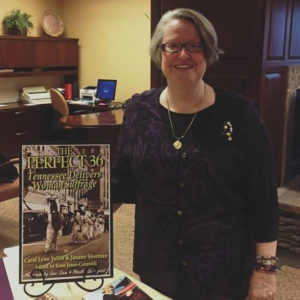 Paula F. Casey is a dynamic speaker on voting rights, particularly the 72-year struggle for women to be included in the U.S. Constitution. She has published a book, The Perfect 36: Tennessee Delivers Woman Suffrage, that’s also available as an e-book (Kindle, Apple and Nook) and audiobook (www.theperfect36.com). She produced a 12:40 DVD, “Generations: American Women Win the Vote,” that covers the 72-year struggle for American women to win the right to vote culminating with victory in Tennessee. The book and DVD are available online from the National Women’s History Project:

She wrote the chapter on “Tennessee’s Superb Suffragists” in the AAUW book, Tennessee Women of Vision and Courage.

Paula has spoken extensively around the country at conferences, universities, colleges, and junior colleges. In her presentations, she highlights the dearth of statuary honoring women. Videos are on her website – www.paulacasey.com – and on YouTube –

She served as president of Tennessee Woman Suffrage Monument, Inc., and was primarily responsible for the fund-raising for the monument that was unveiled on Aug. 26, 2016, in Nashville’s Centennial Park. She served as fiscal agent for Jackson’s statue of Sue Shelton White, the only Tennessee woman jailed fighting for suffrage which was unveiled on May 25, 2017, in front of Jackson’s City Hall. She chairs the Memphis Suffrage Monument committee which plans to unveil the public art in March 2020.

The book is available at these locations:

Jacque Hillman, a West Tennessee native, is the owner/designer of Reconfigured Art Jewelry and senior partner in The HillHelen Group LLC Publishing Co. She received the 2016 West Tennessee Healthcare Foundation’s Jackson Award for the Arts.

She serves as president of the Sue Shelton White Memorial Committee, which has funded and dedicated a sculpture on Jackson City Hall Plaza to honor the renowned state suffragist, the first female attorney in Jackson, as part of the state’s woman suffrage heritage tourism trail in 2020. Jacque is co-founder of the Tennessee Woman Suffrage Heritage Trail, being created to celebrate the 100th anniversary of the 19th Amendment. She also serves on the Tennessee Woman Suffrage Monument Foundation, which has funded the $900,000 suffragists’ monument in Centennial Park by Alan LeQuire. She speaks across the state representing these boards.

As senior partner in The HillHelen Group LLC Publishing Company, her role is editing, interviewing, ghostwriting and designing books for authors as well as researching for these authors. She also creates press releases and scripts for print, broadcast and online. She implements social media and marketing strategies for clients ranging from Boston, Atlanta, Houston and Phoenix to Tennessee.

As a jewelry designer, she was featured on the PBS TV show, “Tennessee Crossroads.” Her work sells throughout the South and Southwest and was chosen for the Pink Palace “40th Anniversary of Crafts” show. She was selected to design 200 limited edition Perfect 36 Society brooches for the Tennessee Woman Suffrage Monument Foundation.

She is the co-founder and president of the West Tennessee Artisan Trail for regional artisans, developing regional art shows and promoting local artists, all juried in fine arts, as well as promoting regional authors, who craft in fine words.

Former Tennessee Gov. Phil Bredesen chose Jacque to be one of five to receive a Tennessee scholarship for the Delta Leadership Institute Executive Academy, Delta Regional Authority, Class of 2010-2011.

In 2014, Jacque was honored to be named 2014 Sterling Award Winner: 20 Most Influential Women in West Tennessee, and she serves as the Sterling Awards director. She serves on the board of the Jackson-Madison County Library Foundation, among other service.

Jacque was an award-winning writer and editor at The Jackson Sun for 23 years. She’s a past multiple winner of the Gannett Corp. Public Service Journalism award, national Gannett Top Feature Writer, and winner, Publisher’s Award of Excellence.

Jacque is past-president for Business and Professional Women of Tennessee Inc., and was chosen a top five national speaker. She is Jackson Area BPW vice-president and a member of the Jackson Exchange Club.

Jacque graduated from Millsaps College with a degree in English, secondary education and a minor in history. Graduate work was at Mississippi State University and University of Memphis.

She is married to Jesse G. Hillman, and they have two daughters, Sara Waide-Bowers of Phoenix and Lea Waide of Los Angeles.